Monday afternoon I was doing my Body Boss workout on the back deck of our house and I thought to myself, there’s a lot of dust out here and then I realized it was falling out of the sky. It was ash and the air was becoming a bit smokey.

We had experienced smoke in the air from forest fires earlier in the summer but this was the first time we had ash falling. By Tuesday morning the air was super smokey and I pulled up the local news report. There was a fire close by; believed to be started by lighting. It grew from 2 acres to 419 acres on Monday and by Tuesday 2,000+ acres had burned. It was only 25 miles from the house and the air became more thick with smoke, we could barely see the ski mountain from the house.

I went for a quick walk Tuesday night (trying to get my 10,000 daily steps in on my Fitbit) and I did not get far, it smelled like a campfire and it became hard to breathe. I headed back inside and made sure all the windows were shut. 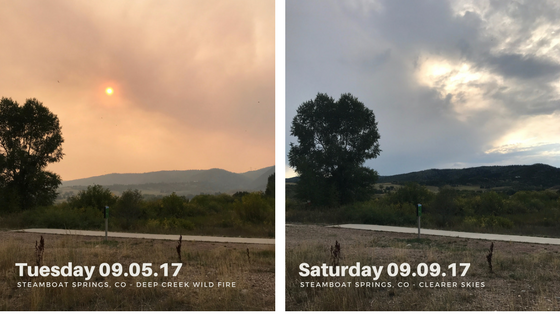 Wednesday was not much better and ash continued to fall from the sky and the fire continued to grow. While I was pretty confident that it wouldn’t reach our house I was super sad for all the wildlife that were losing their homes and fleeing for their lives. Also, worried for those nearby who were being told to prepare for evacuation if necessary.

Wednesday night just before I went to bed we lost power. I checked outside, the entire neighborhood was black and so was the neighborhood next to us! A bit panicked I woke up Dave and asked if he thought the fire was coming? He assured me it was not (pretty sure he thought I was crazy), and I tried to go to sleep. Power came back on a few hours later. In those few minutes when I thought it was possible our house might have a chance of catching on fire I was beside myself, my life is here in this house, my memories, my stuff. I know it sounds superficial but it was my human reaction and scary.

Meanwhile, my co-worker was evacuating south Florida because of hurricane Irma. She has two small kids and thankful they made their way to Atlanta and are staying with family. However, she is so sad and upset. People kept saying, “at least you guys are safe.” Yes, she is so very thankful for the safety of her family but she is also about to lose everything a possibly homeless with her family. My heart is breaking for her and for all those dealing with the mass destruction of the hurricanes. For those in Dallas, Florida, and Mexico that are in harms way my heart goes out to you. I pray that you have strength, love, patience, and peace in your heart as you bear the days ahead.

I am a blogger living in Steamboat. I love all my new adventures. Follow along for love, laughs and life’s adventure.

Merry Christmas🎄. We had a great Christmas in Steamboat together. Hope everyone had a great day!!
Happy Thanksgiving!! So thankful for wonderful friends and family in our lives. Hope everyone is having a wonderful day!
We are having such an amazing fun fall here in #steamboatsprings! Love hanging out with our crew #makingmemories #fallinsteamboat Pic 1: Chili Cook-Off Rest of pics: hiking Rabbit Ears
@ebwaldrop life just keeps getting better and so glad I’ve had you to share it with. Happy Birthday to the best sister in the 🌎.
We are really getting after summer here in Steamboat ☃️. Woke up to a new fresh coat of snow (pic two) 🤷🏻‍♀️. I am told this is definitely not normal.
This post is late because we spent the entire day together. Happy Father’s Day @kenwickerham so stinking lucky to have you as my dad!! Thanks for all of your love and support throughout my life. Had a great time hiking and hanging out today.